Ezra’s favourite album is Neo Zone, and his favourite song is “White Night” because he can nap easily to it.

Ezra is a little troublemaker, he likes to jump out and try to scare people as they’re walking around the corner. He’s very playful & he loves paper… yes paper, be it a receipt or a Jaehyun poster on the wall, he’ll find a way to get to it and chew it up. He’s also fond of watching movies or TV. He even sat through the “Neo City: SEOUL The Origin” concert DVD with me. His favourite snack is seaweed, so you’ve gotta store it in a safe place otherwise he’ll find it! 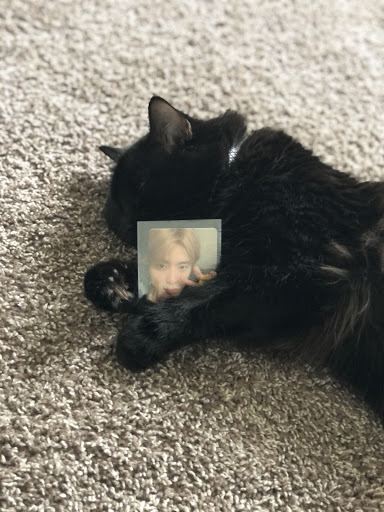 Females: Two Dogs & One cat. Both Mila and Snow White are Pit Bulls, with Mila being a Jack Russel Terrier mixed with a Pit Bull.

Snow White: has no favourites

Mila’s favourite song is “Sun and Moon” —  that’s her top song in her sleep playlist.

Snow White is albino, with two different shades of blue for her eye colour, she’s also deaf in both ears. Mila is very very energetic, she’s super playful and loves to chase you around. Suki is a loner haha

She gives off strong WayV vibes, if I were to put her in an NCT unit. She’s small, but very playful, energetic and sociable. She’s my sunshine (and so is WayV, it’s meant to be)

Check out the adorable Neo Pets from Fall 2020 here!