If rule #1 of amusement parks is to keep the charm to a minimum, these 11 members already have us beat. Almost a year since their last comeback with CHASE, K-pop supergroup The Boyz returned with their new mini-album THRILL-ING on August 9 at 6 PM KST. And much like an amusement park, The Boyz offer an assortment of rides and sounds in this album.

Kicking it off with the title track “Thrill Ride,” the song is fitting to show The Boyz’s refreshing color. The song takes us back to some of The Boyz’s earlier lighthearted concepts – tracks such as “Giddy Up,” “Bloom Bloom,” and “D.D.D” that have stolen our hearts in the past. New to the collection, “Thrill Ride” is a pop song with hip-hop undertones. The playful summer vibes of the music and addicting melody make it an instant earworm. With its signature roller coaster dance, the lively song is sure to raise the energy in a room.

With lyrics hinting at a thrilling relationship, the cheeky members surely bring along the visuals. In the music video, the 11 show-stealers seem to be enjoying a vacation, reclining on lounge chairs, dressed in fluffy robes, and taking in what appears to be a resort experience to the fullest. Throughout the music video, they also appear as staff of the resort, taking on the role of lifeguards, waiters, and bellhops. The song shows the power of The Boyz. From their original debut in 2017, they have mastered the art of a dominating and endearing presence that fully shows their appeal. Coupled with the sharp choreography and vibrant aesthetic of the track, it is the perfect song to lead the rest of the album.

As “The B” (The Boyz’s fandom) know, the boy group does not disappoint with their B-sides. The members have already shared their favorite side-tracks from the mini-album. “Out Of Control” is a rougher-sounding song at its start, immediately contrasting the lightheartedness of “Thrill Ride.” The song has a powerful buildup before dropping to a more mellow sound in the pre-chorus. The chorus and bridge are laced with dreamy vocals and high notes that touch the heart. Vocalist and main dancer Q contributed to the lyrics for this song.

The album switches vibes as we transition to “Dancing Till We Drop,” a disco-pop dance song. Perfect for the summer, the song paints the image of a purple night amidst the “sparks of thrilling colors” in reference to what happens when the sun goes down. The lyrics are subtly romantic, urging the night to last longer to maintain the exuberant feeling. “Just like this, music on,” the members sing. It continues, “My heart overflows / I just want to hold onto you a little longer.”

Next, we take a stroll through the resident horror land within amusement parks. “Nightmares” begins with a ghoulish vocalization from the members coupled with an eerie beat. The thrilling sound instills horror into the listener as the lyrics detail an endless night without an exit. The lyrics say, “In the fragments of an enchanted dream when you cut my heart / Nightmares will unfold in the cold darkness.” The creepiness of the song heightens its fascination. 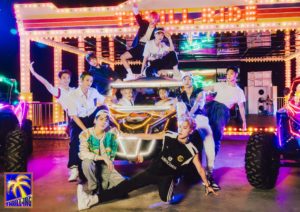 “Merry Bad Ending” takes a step in the opposite direction with more electronic dance music elements and a slower melody. The sweet vocals of the group fill the chorus with promises of a love confession. Rappers Sunwoo and Eric wrote lyrics for this track, and Sunwoo also participated in the last track of the mini-album, “B.O.Y (Bet on You).” The latter song takes us back to nighttime, but now we’re stargazing on a summer night. “The dream that will last forever at the end of summer,” the members sing, cementing the sweet moment to be reminisced upon at a later time. Vocalist Younghoon has shared his love for the song on VLive, saying, “I really like that kind of bright feeling! It’s the kind of song we’d perform at the end of a concert!”

The new mini-album already has had its fair share of successes for The Boyz. Since the release of the mini-album, THRILL-ING has doubled in first-day Hanteo sales compared to the former CHASE album. It was also the fastest song from the group to reach 20,000 likes on MelOn and peaked at #1 on Bugs chart. 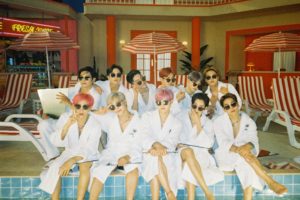 These achievements are a testament to the group’s effort, who have kept a busy schedule despite the extended return. The Boyz wrapped up their participation in Mnet’s Kingdom: Legendary War, released singles “Christmassy!” and “Drink It,” and shared with fans other solo projects through the group’s SoundCloud page. Seeing the group return to their own stage after such a long time is, well, thrilling. As The Boyz become more prominent figures in the world of K-pop with their overwhelming stage presence, vocal abilities, and charming personalities, it is only a wonder what ride they will take us on next.

Listen to THRILL-ING on Spotify and Apple Music!

Want more The Boyz coverage? Check out our recap of their K-Pop SuperFest stage here!

The Boyz Unveil Teasers For MAVERICK 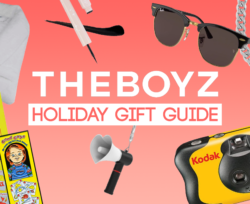 10 The Boyz Inspired Gifts for The B in your life