With standing ovations, surprise guests, and a boisterous crowd, the third day of the Star Wars Celebration began with the most anticipated panel of the weekend—Mando+: A Conversation with Jon Favreau and Dave Filoni. Hosted by Ash Crossan, the event brought fans back to the beginning of The Mandalorian, revealed the extended trailer for the upcoming season, and surprised fans with an exclusive look at what’s to come in the upcoming series Ahsoka. Here are some highlights from the Mando+ panel last Saturday, May 28.

Jon Favreau and Dave Filoni are the creative minds behind The Mandalorian. Their shared love for the Star Wars Universe led them to create new and exciting stories that expand on the world that George Lucas brought to life 45 years ago. The Mandalorian is a space western series created by Favreau for Disney+. Dave Filoni, Kathleen Kennedy, and Colin Wilson serve as executive producers of the show. The series follows lone Mandalorian bounty hunter Din Djarin on the run as he protects “the child,” Grogu, from remnants of the Imperial Empire throughout the outskirts of the galaxy.

“To me, it’s been a dream come true. I’ve always loved Star Wars, I grew up watching Star Wars. The type of story that I wanted to tell really suited the small screen,” Favreau shared. “Because I wanted to really tear it down to something about a few characters and a personal story set in that world. So that we had someplace to grow and also an opportunity to bring new people in who might not be up to all of the lore. And this became kind of an entry ramp, and people as these new characters that had existed before. Thanks to the Disney+ streaming service, they could go and watch everything.”

Favreau mentioned being proud of the fact that viewers were not only watching their newest Star Wars series, but also going back to watch all of the older series and trilogies in the franchise. One of the benefits of Disney+ is it offers viewers the opportunity to watch every film and series (live-action and animated) within the Star Wars franchise chronologically. Favreau expressed his appreciation for being able to tell the Star Wars story for television, granting them the chance to evolve their characters through every chapter.

Pedro Pascal’s surprise appearance in the panel was met with a boisterous standing ovation by the crowd. As fans showed Pedro their love and appreciation, the actor reciprocated their sentiment. “My heart just exploded inside my body,” gushed Pascal.

To say the Chilean actor is beloved by Star Wars fans is an understatement; his character is one of the fandom’s favorites. One of the things they love the most about his character Din is his devotion to his son, Grogu. Din’s separation from Grogu during the finale of season two shocked the Mandalorian fandom. Pascal shared his sentiment on the separation. “It’s very hard to be separated. It’s the closest I’ve come to being a dad. We watched the show to see a child love his father, I get it, I get it. Maybe I should have a kid.”

Though Pascal may be the face and voice of Din Djarin, he shares the role with two other actors, Lateef Crowder and Brandon Wayne. Pascal’s underneath the helmet during direct scenes that don’t require any stunts. Wayne takes over during gunslinging moments, and when Mando has to engage in any kind of risky stunts, Crowder dons the armor.

“I learned so much from the two of them, just learning basically how to share a skin with them,” Pascal expressed. “For me, it started with them.”

Exclusive Peek Into Third Season of The Mandalorian

The trailer for the third season of The Mandalorian was revealed again during the Mando+ panel. Though not yet available to the public, Favreau and Filoni surprised fans with an extended version of the trailer for the upcoming season. One of the newest scenes for the trailer showed the remnants of Mandalore, the homeworld of the Mandalorians, destroyed during the Siege of Mandalore. Another added scene illustrates an injured Din within his N-1 Starfighter. Grogu is sitting atop the bounty hunter’s lap who appears to be barely conscious. Knowing Din won’t be able to manage the ship in his state, Grogu takes the reins and pilots the ship himself.

Pascal wasn’t the only surprise guest appearance at the panel; Rosario Dawson and Natasha Liu Bordizzo, stars of the upcoming Mandalorian spin-off Ahsoka, also made their way onto a stage where they were greeted with a standing ovation by fans. Dawson, who was absent on the first day of the event due to her shooting schedule, was happy to take the stage along with Favreau and Filoni to talk about her new series.

Series creator Dave Filoni was not short of surprises. Though Ahsoka is still in production, he gifted fans with a short clip of the series, a surprise that left many fans reeling. The clip showed Ahsoka Tano, Sabine Wren, and Hera Syndulla walking into what appears to be a large cruiser or city planet. The next frame illustrated Ahsoka walking and touching along the markings of an old, decrypt-looking temple. In the final scene, Ahsoka appeared within some ruins with her hood-up, wearing the same gray outfit she had in The Mandalorian.

Ahsoka is set to premiere in 2023, along with The Mandalorian’s third season, which is set for February 2023.

If you’re a fan of The Mandalorian, you know that the one trait everyone loves the most about his character—besides how badass he is—is his fatherly instincts. Daddy Din’s love for Grogu is so great he did the one thing he was never to do: breaking his creed by showing the foundling his face. Mandalorians cannot show their face to anyone who is not a part of their clan. Breaking the rule results in renouncement from the cultural group. Din Djarin broke his creed by showing his son his face in front of others. It was a decision that came from the love he feels for Grogu and the fact that he wanted to show him his face for the last time.

Daddy Din and Grogu are a pair like no other, a precious relationship beloved by many Star Wars fans. The moment Favreau brought the young foundling on stage the crowd erupted into cheers. Though we will have to wait a little longer until we see the reunion between Grogu and the Mando, Pascal’s “Hey, little guy” and his reunion with Grogu during the panel was sweet and endearing. 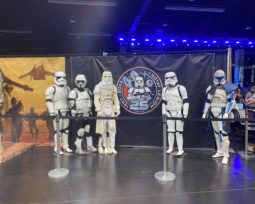