Globally acclaimed model and actress Hoyeon Jung continues to prove her fashion chops with an appearance on one of fashion’s biggest nights. After modeling for nearly a decade and blowing up in the acting industry with her role as Kang Sae-Byeok in Squid Game, the 27-year-old finally made her debut at the Costume Institute Gala.

This year, the Met Gala theme, “In America: The Anthology of Fashion,” evoked America’s Gilded Age, a period spanning the last decades of the nineteenth century. Embracing the white-tie “Gilded Glamour” dress code, Hoyeon graced the red carpet in a look from the French legacy house, Louis Vuitton.

Dubbed a supernova by Vogue, Hoyeon made her Met Gala debut in a navy suede cut-out mini dress with black leather details—an item from Louis Vuitton’s Resort 2017 Collection. Countering the simple and chic style of the dress, the South Korean actress embraced the gilded theme of the fundraiser through her intricate silver drop earrings, gem-encrusted bracelets and rings, and her matching box clutch, emitting nothing but extravagance through subtle detail. Hoyeon’s boots were a final touch on the ensemble—a more modern and sleek take on the practical footwear of the era.

The simplicity of the look allowed her natural beauty to shine as she had a light makeup look with a wavy partial up-do. This choice was deliberate as Hoyeon’s makeup artist Nina Park and hairstylist Jenny Cho used artwork from the Gilded Age as inspiration for her look. The free and partially unkempt nature of her hair is a statement, illustrating the playful hairstyles of the historic period.

Hoyeon kicked off her modeling career as a 16-year-old. After debuting on the runway during Seoul Fashion Week, the star then joined Korea’s Next Top Model. However, it wasn’t until 2016 that Hoyeon ventured into the international fashion scene. The multihyphenate’s first show took place during New York Fashion Week at Opening Ceremony’s 2017 Spring/Summer show.  The same year, she landed her first contract with luxury brand Louis Vuitton and was chosen as one of the “Top Ten Breakout Models” by W Magazine. The model would then become one of the most recognizable faces of the French house, leading to her appointment as Global Ambassador for Fashion, Watches, and Jewelry in October 2021.

Not only a star for Louis Vuitton, but Hoyeon also has an extensive fashion resume that includes runways and campaigns for other fashion houses such as Chanel and Prada. Back in February, the model reached another career milestone, becoming the first East Asian star to score a solo cover on Vogue.

Despite being an established face in fashion, Hoyeon Jung only recently saw her breakthrough as an actress. In 2020, she joined Saram Entertainment and a month later auditioned for the role that would take her to global stardom. Cast as Sae-Byeok in the record-breaking Netflix series, Squid Game, Hoyeon made her acting debut in 2021. The show was well-received around the world, putting the newbie actress under the spotlight. Hoyeon’s first acting gig has been an acclaimed one, earning her several recognitions, including the SAG Award in the best actress category.

As Hoyeon continues to expand her multifaceted career, fans of the star can look forward to her role in Apple TV+’s upcoming production, Disclaimer.

Want more on the Met Gala? Check out our breakdown of this year’s theme here. 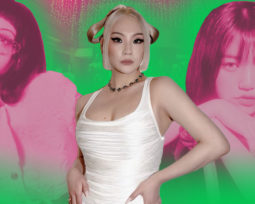