Taeyong’s ascendant sits at 7° Pisces. This degree indicates that success may be obtained by remaining humble and helping others, rather than by being self-centered. At first glance, Taeyong is graceful, caring, and concerned with fairness and harmony. He is charming and may be well-liked by authority figures and influencers.

The planet Saturn deals with responsibility, limitations, cautiousness, and maturity. It sits in the first house at 24° Pisces, suggesting a slightly refined version of the sternness that Saturn can present. This degree may also indicate victory, resilience, upright character, and prosperity. Taeyong is a person who has a lot of responsibility because he is seen as capable of handling it. He may feel pressure to perform and be self-conscious as a result. His first house ruler is in the ninth house, suggesting a love of travel, learning about other cultures, and exploring his beliefs. All of these factors are likely a part of his core identity.

His second house begins at 22° Aries, with South Node at 2° Taurus. This degree warns against associating with toxic and jealous people surrounding them. In the second house, this may indicate that some people may be jealous of the opportunities he receives, his financial status or possessions, or even his self-esteem. His South Node in this house indicates that he is more comfortable doing things independently rather than depending on others or their resources for him to grow.

The third house sits at 23° Taurus. This is an empty house, so there is not much conscious energy devoted to writing, communication, technology, and driving. The third house lord falls in the fourth house. His writing and speech come from a place of strong emotions, especially those related to his family or his past. He may also be prone to overthinking things he did in the past. He cares deeply about people close to him and he likely tries to communicate with them as often as possible.

The fourth house starts at 17° Gemini, with Mercury at 17° and Venus at 25°. This indicates someone who is ambitious and has a strong will to carry out their plans. In this case, this may indicate that Taeyong is someone who is quite capable of expressing his emotions and what goes on in his private life. The fourth house being in Gemini may allow for an easier time putting words to feelings than it would in a water sign, such as Cancer, Scorpio, or Pisces.

Venus and Mercury in this house indicate youthful and fond feelings towards family and childhood friends. Venus at 25° can indicate someone who is very witty and clever with words, with a stubborn nature and strong concern for others. Taeyong’s Mercury and Venus square Saturn, which may indicate he receives a lot of criticism for what he says and his art, or he may feel disrespected when other people give unsolicited advice about those things. The fourth house lord is in the fourth house, so much of his mental energy is put towards his private life and emotions.

The fifth house starts at 8° Cancer, with the Sun at 9° Cancer. This degree indicates humility, contentment, virtue, and success. The ninth degree of Cancer suggests fruitfulness, industriousness, and honor. The projects he creates will make him very successful and he will likely feel content in what he puts out into the world. There is a great deal of depth and wisdom to the art he creates, and he lives and breathes the very essence of creation. He may also get along well with people younger than him.

His sixth house begins in 3° Leo, with the Moon at 18°. These degrees signify patience, determination, self-control, and potential for pridefulness. He is very patient when it comes to his work, and he is dedicated to making sure it comes out perfectly. However, he must make sure he takes care of his emotional well-being, as those with the Moon in this house can become physically ill if their emotional health suffers. He has an affinity for animals, and is quite fond of them. He is also very responsible, and taking care of daily tasks can be quite soothing to him.

The sixth house lord is in the fifth house. A large part of his persona is included in his art. He is also a born performer, and possesses strong charisma, especially during his performances. The fifth house Sun native is a joyful, bright personality, and it shows when they decide to express themselves. With the Sun trine his ascendant, his charisma matches his true personality well and is communicated effectively to any audience in front of him.

The seventh house begins at 7° Virgo, with Mars at 18° and Chiron at 21° Virgo. These degrees suggest a strong sense of fairness, thoughtfulness, generosity, sincerity, and sensuousness. The theme of self-restraint and being cautious of who he surrounds himself with has popped up once again, so this is something to take to heart. He is a generous and sincere person, but not everyone is on the same wavelength. Mars conjunct Chiron indicates some emotional pain regarding one-on-one relationships, and even those who are supposed to be his supporters. Essentially, he has been screwed over multiple times by others, and understands that heartbreak all too well.

His seventh house lord is in the fourth house. The fourth house deals with family, childhood, and one’s inner world. With Mercury and Venus in this house, he may care a great deal about these things and might only open up about it if he wants to become closer to someone. This may mean he is reluctant to share his feelings and thoughts, and it can create resentment in the other person. There is clear tension due to the Mercury square with Mars and Chiron, and this will likely take a lot of effort to balance.

His eighth house begins at 22° Libra, with the North Node at 2° Scorpio. These degrees suggest carefulness, patience, and realism. When it comes to close relationships with others and their resources, he is wise and conscious of how he interacts with both. He is independent and does not like to rely on other people as it makes him uncomfortable, but he will be better off if he learns to accept help when he needs it.

The ninth house falls at 23° Scorpio, with Pluto at 28° Scorpio and Jupiter at 7° Sagittarius. These degrees indicate utility, industriousness, innovation, and cautiousness. His beliefs and values are very important to him, and he highly values learning and continued growth. This can indicate someone who is a strong perfectionist, and who will never be content until it is perfect in their eyes. While this can be a good thing, it can also be to the native’s detriment, especially considering he has Pluto squaring the Moon. This indicates perfectionism getting in the way of his emotional well-being.

The ninth house ruler is in the seventh house. His relationship encounters play a large part in how he views the world and what his values are. This is why keeping good company is extremely important for him. He also has a strong pull on his international fans, and is likely very popular in other countries.

The tenth house begins at 17° Sagittarius. It indicates eccentricity, genius and a lack of order, as well as passion. Taeyong has no planets in his tenth house, however, his tenth house lord falls in the ninth house. To him, a career that can provide him with opportunities for growth, learning, travel, and freedom to create is of the utmost importance. He wants to be seen as someone who is always improving and working hard to be their best, and his work ethic proves this.

The eleventh house starts at 8° Capricorn, with Neptune at 24° and Uranus at 29°. These degrees symbolize a need for patience, danger of superficiality, ambition, and a potentially impulsive nature. This seems to apply more to his fans, as they have no option but to be superficial because they have little knowledge of what happens behind the scenes. There may be times where fans project their wishes and goals for Taeyong onto him, and in reality he may not want it at the time, or at all. Taeyong seems to be hesitant in terms of putting out solo work, but he is not impulsive about it and takes his time until he feels confident in his work.

His eleventh house ruler is in the first house, reintroducing the idea of fan projection onto him. As he grows as an artist and as a person, he is becoming more confident in his decision making. Sometimes, this may clash with the fans’ expectations of when certain things happen, but it is highly likely he sees and has goals to put out solo work and content.

His twelfth house begins in 3° Aquarius, which indicates trustworthiness, merit, talent, and authority. He tries hard to show people he cares, as it seems like he may be afraid of seeming cold or unapproachable to other people. The twelfth house ruler is in the first house, suggesting that a lot of subconscious energy is put towards his status as the leader of NCT. He is very aware of the role he has been given, and does his best to fulfill this, but his perfectionistic nature may have him experiencing self-doubt often. 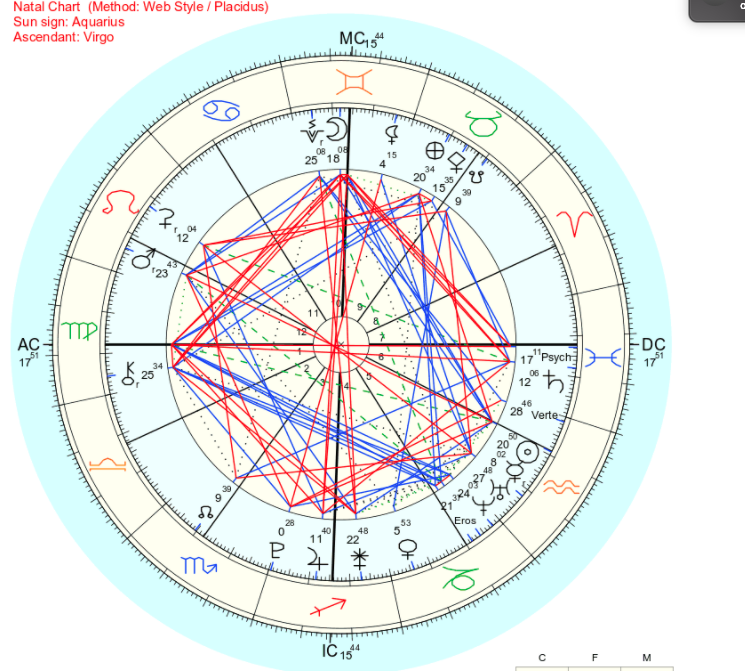 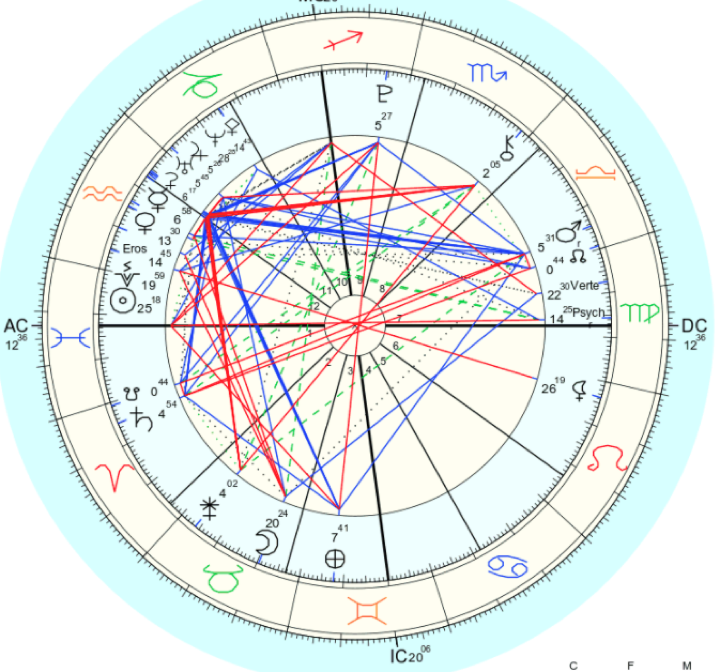 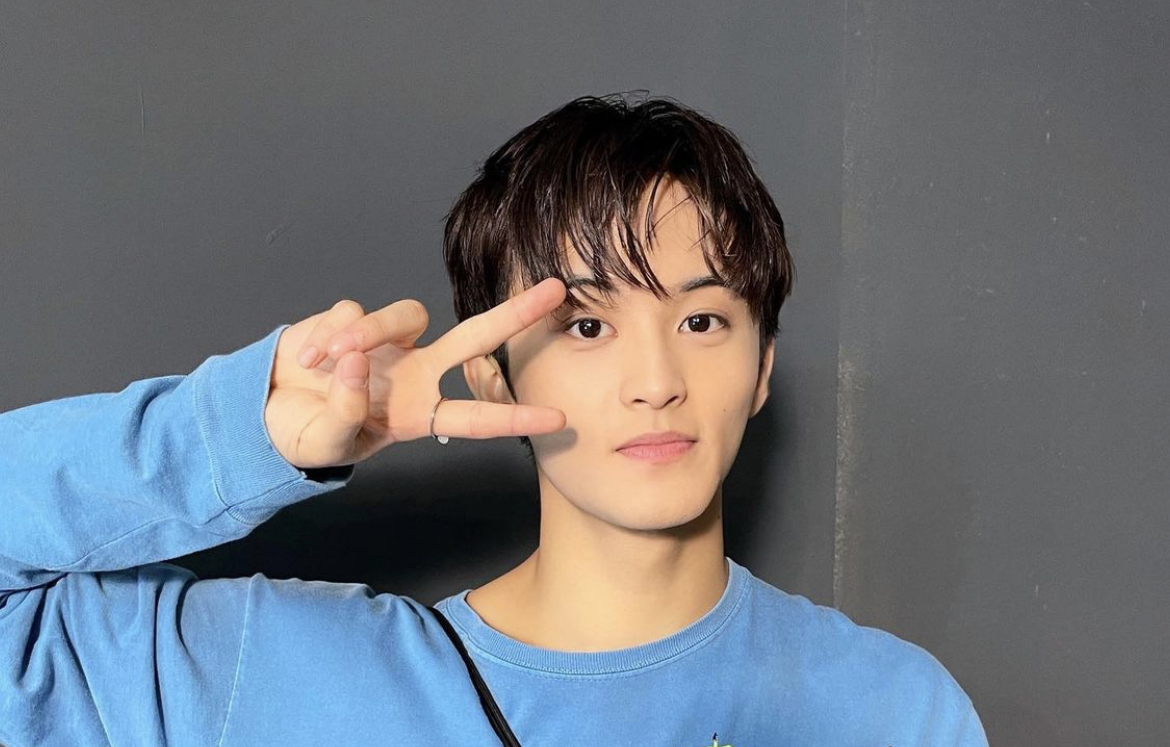